“Well, it’s a big HELLO from Grime TV, your host, Dermot Blimp, and my glamorous assistant, Gloria MT Nester!”
A Floor Manager whips up the studio audience to feverish applause, with wolf whistles and yelps further elicited with the skill of a symphony orchestra conductor. Gloria twirls her golden gown and flutters her heavy, sparkly eye lashes as more applause is milked from the studio sea lions. Dermot pulls down his powder blue jacket cuffs and makes an awkward twirl, like an only child desperate for attention.
“Tonight, it’s the night we’ve all been waiting for!” Dermot shouts to quell the noise. “Yes, after three rounds of skulduggery and back-stabbing, we now have the Grand Final!” He exhibits his pearly white grin to camera one and then, with a flick of his blond fringe, turns to his left. “Gloria, please bring on our two contestants!”

A wave of applause greets two shuffling figures who emerge almost sheepishly from opposite wings, blinking in the glare of the studio lights. One is a large furry orange monster, who almost stumbles and has to be helped to his podium by the remarkably agile high-heeled Gloria. The monster grunts and makes an awkward grab for her bum, but she sashays out of reach with practiced skill, whilst maintaining her perfect smile.
“He’s a bit of a lad – welcome contestant number one, the Honey Monster!” Dermot trills. Wild applause, walrus noises and whistles from the unruly half of the audience breaks out like a fever.
“And to my right, his opponent – clever but dangerous, it’s Doctor Hannibal Lecter!” More reserved clapping greets the sinister figure standing to attention in a black suit, acknowledged with a slight bow and a fixed smile that doesn’t touch his dark, soulless stare. 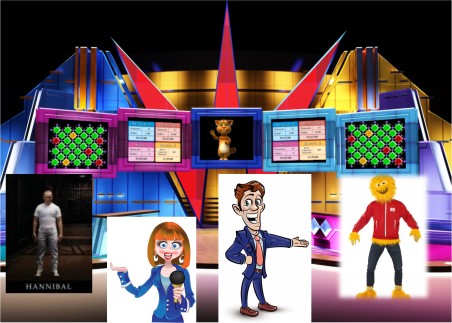 Dermot and Gloria are now side-by-side between the two contestants, and Dermot squints at the prompt card in his hand before grinning at the camera. “Yes, folks, after three gruelling weeks of competition, we now have a final showdown between the two highest vote-winners; to my right, the Honey Monster, and to my left, Doctor Lecter, or Hannibal the Cannibal to his friends.”

Further applause allows him time to fix his floppy hair in the reflection of the camera lens. “Now for a round of questions aimed at eliciting their suitability for the top position, followed by a studio vote. Gloria, our first question please.”
“Thank you, Dermot. The first question, from Mrs Plimsole in Harrow, to both candidates, is, ‘What is your favourite meal of the day’. First, to the Honey Monster.”

The camera zooms in on the orange fur-ball who tilts his head, causing his disk-black eyes to roll. “I like Sugar Puffs for breakfast! I am the BEAST, I mean BEST –  vote for me!” he growled triumphantly, punching the air. The audience applaud as the camera returns to the smiling Gloria.
“Thank you, Mister Monster. And now the same question to Doctor Lecter.”
A hush falls on the studio as the camera slowly zooms in on his dead-eye stare. “I like to have dinner with an old friend,” he quietly intones. “I am a gourmet chef in my spare time, and my speciality is liver, gently sautéed with fava beans and served with a room temperature Chianti.”

Four further lifestyle questions are asked by Gloria before Dermot reclaims the limelight. “Thank you, Gloria, and our contestants. I think we can say we know a lot more about them. Now for a more serious question. What is the biggest change each of you would make if you won this competition?”
The Honey Monster scratches his wild, unruly orange head and rolls his eyes. “Erm, more public holidays and free Sugar Puffs! Hee hee hee.” His huge shoulders rise and fall in mirth as the audience whistle and clap.
“The same question to you, Hannibal,” Dermot grins.

Doctor Lecter fixes him with a deadly stare at presuming to address him by his first name. “You must come ‘round for dinner, Dermot, my dear. I would continue with my important work of downsizing the public sector and freeing up more money for the already filthy rich; and covertly privatising the health service so that party members can benefit from directorships and bonuses through briefcase companies whilst a string section plays Mozart over the death screams of our nation.” He smiles benignly as polite applause ripples around the room.
“Well, that’s some ambition,” Dermot croons. “Now, one final question before we go to voting. Based on experience, what do YOU think best qualifies you for the top job? Mister Honey Monster first.”
“Errr… because I’m a big orange lovable monster, I can get away with anything because of my stupid grin and make stuff up that I later deny. Tee hee hee.”
“And what about you, Doctor Lecter?”
“I am not handicapped by compassion or empathy, Dermot, and smile as I make life-or-death decisions. As long as the rich get richer, that’s all that matters.”
“Wow. What succinct summations from our two political heavyweights. As with all good democracies, it’s time for our carefully selected studio audience to vote on who will be the next Great Leader of the Capitalist State of Great Britain and Northern Ireland. What next, Gloria?”

“Thank you, Dermot. Whilst our audience vote and we analyse the result, we have some entertainment for you – a Morris Dance by the Home-Grown Ninnies troupe, entitled, ‘Bye bye Europe!”
Five minutes later the troupe troop off and the two contestants are left standing between Dermot and Gloria. Gloria is holding a large gold envelope.
“And now the results,” Dermot announces as seriously as he can. “Gloria, please open the envelope.”
She deftly slices it open with a long finger nail and holds the card in front of her. A nervous glance to her co-host raises the barely-contained tension in the room to fever pitch.
“And the winner, and new leader of our nation is… the Honey Monster!”
The audience erupt into shouts, whoops, whistles and raucous applause, as the Honey Monster runs towards them and throws himself onto the front rows. The elated crowd carry him overhead, chanting, “Tell us about the honey, mummy!”
The camera pans back to Gloria who glances at the disappearing figure of Dermot, Hannibal Lecter’s hand firmly on his shoulder as he is guided into the wings. “And that’s the end of the show, and, hopefully, the start of a bright orange future for our country. Good night Britain!