I’ve taken on board some useful feedback following the release of my first novel, Devil Gate Dawn, in April 2016, and as a result have made a few changes:

All in all, I’m proud of my achievement in pasting together this story from blogs and new material, and am thankful for the input of my copyeditor, Sinead Fitzgibbon, in helping to shape it into a structured story with sub-plots and suitably developed support characters.

George battles his way through problems with a calm, stoic approach, often bewildered by the extreme methods and actions of others.  In many ways, his pragmatic approach has mirrored my own problems with battling health issues whilst writing it.

I’ve made notes for a follow-up, and have pored over the 10,000 words of my abandoned novel, The Langley Leopard (submitted to the Richard and Judy novel competition three years ago!) that preceded this one, looking to salvage bits.

I’ve temporarily dropped the price to 99p and equivalent in other currencies to attract new readers.

In the meantime, I’m immersed in the mid-fifth century, ploughing on with researching and writing my next historical fiction novel, Ambrosius: Last of the Romans. 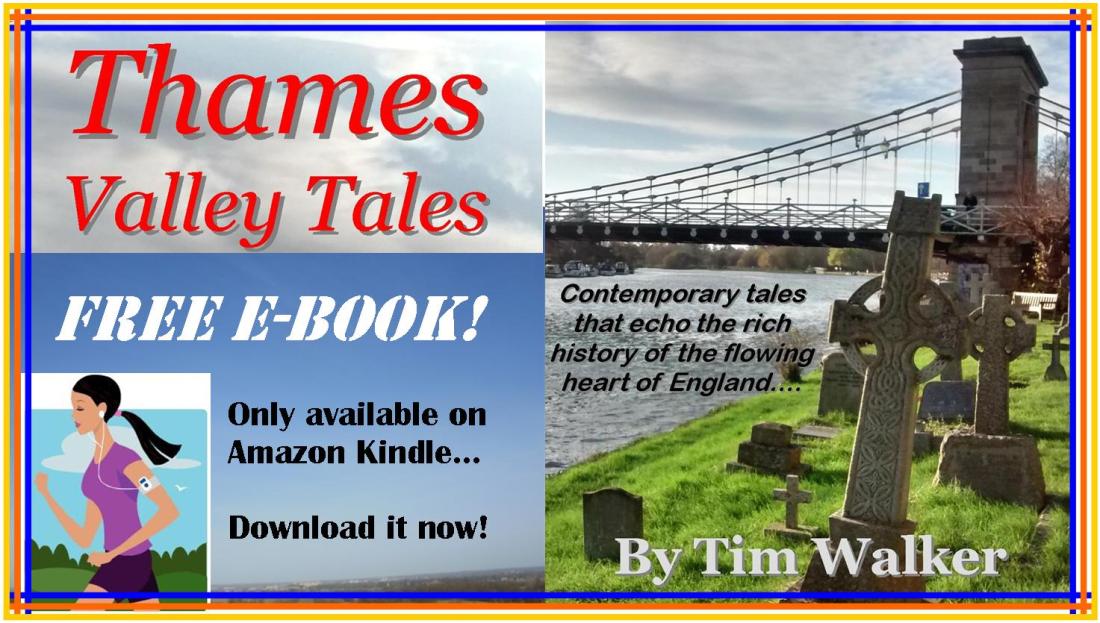 Thames Valley Tales is a collection of 15 short stories written by myself between 2013-2015 and first self-published on Amazon Kindle in July 2105.  To coincide with my presentation on Self-Publishing at Slough Library today (Thursday 2nd June 2016), and to demonstrate the ‘free promotion’ option on Kindle Direct Publishing (KDP),  I have made the book a FREE download for today and Friday 3rd June…so what are you waiting for?

My first novel, Devil Gate Dawn, is now up and available to download from amazon kindle store.  It will normally be £2.10/$2.99 per download, but for this weekend, Saturday 23rd and Sunday 24th April it will be a FREE DOWNLOAD.

I badly need your support to read and review this short novel, hence the two day free promo.

Devil Gate Dawn is a tense near-future thriller set in the UK and USA in the year 2026.  Retired railway worker, George Osborne, is drawn into a battle with a terrorist group as the country slides into chaos.  Will he succeed in neutralising a deadly internet virus and help rescue the kidnapped King Charles III?  Find out as dawn breaks at Devil Gate Drive…

Don’t have an Amazon Kindle reader?  You can download their fee app and read on any device:

My first novel, Devil Gate Dawn, has been selected for the Amazon Scout scheme (it has been professionally proof-read and copyedited and they have approved my manuscript).  This means I am competing with other debut novelists for an Amazon Kindle publishing deal.

Their stats record how many reads I have of my 5,000 word opening extract, and I have an encouraging 200+ reads after the first week – the promotion period runs for 30 days and ends on 9th April.  When they first put up my opening 5,000 words I carefully read through it and yes, spotted a couple of minor errors and things I’d like to change, but also notice, with horror, that my first dramatic moment comes just after the cut-off!

I got in touch with them (amazon.com in the USA) and requested a re-submit.  After a couple of days they agreed, and I did some editing and re-submitted.  The new version went ‘live’ on Friday evening, and it now reads much better (in my view) and ends on a dramatic high…

Please read my extract and if you feel it is worthy, please nominate it.  After the 9th April, the book with the most nominations wins a publishing deal…help make it me! 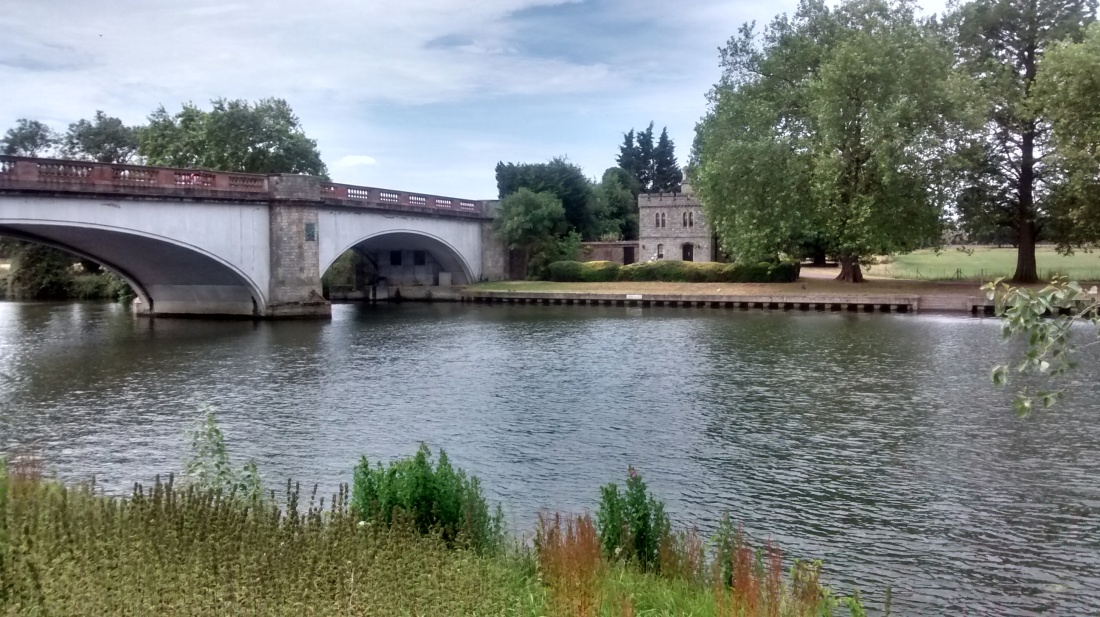 Berkshire-based writer Tim Walker brings the rich history, culture and legends of the river Thames valley to life in his new book, Thames Valley Tales.  The collection of 15 short stories contains snapshots of contemporary life in the towns and cities along the river Thames, often including the re-telling of historical and legendary events associated with the flowing heart of England.

London is represented by two stories – The Seesaw Sea of Fate (an historical pub crawl adventure) and Blue Sky Thinking (based on a real prison escape).  Further upstream, Runnymede Rebellion (recently short-listed in a national short story competition) examines the true meaning of freedom, and The Colnbrooke Caper is a fast-paced crime thriller.

The Merry Women of Windsor is a humorous up-date of a Shakespeare comedy, and The Long Walk is a windy romance set in the shadows of Windsor Castle.  Maidenhead Thicket features the ghost of Dick Turpin, and The Devil’s Highway follows a man’s journey to Bath for a job interview whilst reflecting on the history of the Roman road, now the A4.

Murder at Henley Regatta is a good old-fashioned murder mystery and Marlow is represented by the story Swans on Parade. Deviating to the west of Goring, on the Ridgeway Path, is the setting for The White Horse, and further north in the famous university city Oxford, a shape-shifting tiger is on the prowl in The Tiger’s Foot.

Beyond Oxford, the river winds through country meadows steeped in history, marking what was once the boundary between the Saxon kingdoms of Wessex and Mercia.  Two stories are set here: The Grey Lady is a civil war ghost story and The Battle of Radcot Bridge has a school teacher attempting to enthuse his pupils with a locally set story from English history.

All in all, the collection of stories paints a picture of vibrant and widely-contrasting communities of city, town and country dwellers in this important heartland of central southern England.  Many of the historical events that shaped England were witnessed along the banks of this mighty river as it flows 215 miles from source in a Gloucestershire meadow through nine counties to London and the North Sea.

Thames Valley Tales is available at the introductory price of £1.99 as an e-book download from amazon.co.uk.  Just put ‘Thames Valley Tales’ in the search box, and if necessary, download the free app for devises other than Kindle.  Happy reading, and please leave a review!

“I need a new gas boiler like I need a hole in the head.  Oh, I already have one of those.”  I leaned forward to show the startled Gas sales man on my doorstep the horrific open wound in the centre of my bald head.  I know it was unfair of me to cut short his sales pitch in this way, but what the hell.  I had been living with this deformity for a year and was now sick of it and wanted it gone.  Filled in.  Like with Polyfilla or plasticine.

I was sick of waking up each morning with an itchy head, and despite attempts to cover the hole with plasters, would always end up touching it and picking at the scabby fringe.  This would cause it to bleed and so the process of healing overnight only to be picked again in the morning continued, like the punishment of Prometheus – condemned by the Gods to have his liver torn out each morning by an eagle, only for it to heal each night as he writhed in eternal torment.

But my torment would soon be at an end.  My day of reckoning was now at hand.  Tomorrow morning I would present myself at my local hospital for an operation.  The Plastic Surgeon had tried to reassure me, but his words were full of ‘ifs’, ‘buts’ and ‘possibles’.  His previous attempt at a skin graft had not worked, leaving me with a hole and a deferred judgement until my strength had sufficiently recovered.  He had performed similar procedures before, and there was a fairly good chance of success.

“There are risks”, he had said, “Are you sure you want to go ahead?”

“Yes, I can’t live with this hole in my head any longer,” I had replied.

I pulled on my coat and headed for the door.  A walk in the winter sunshine was what I needed to calm me and steady my nerves.  The novelty of being able to put my finger into the hole and touch my skull had worn thin.  A bit like the surface of my skull – worn thin, where the radiotherapy had degraded the surface of the bone.  A Halloween act once a year, maybe, but the rest of the time an annoyance.

Just over a year ago a lump had grown on my head.  I continued to work in my sales job, wearing a baseball cap to hide the offending lump from customers and give myself a better chance of making a sale.  Look normal, smile, keep calm and carry on.  The British way.

My GP was suitably excited, the way doctor’s get when presented with something unusual to break the monotony of coughs, colds and other mundane complaints.  My lump had grown to the size of an egg.  And so my journey into the world of the NHS began.  He sent me to a specialist who sent me for a biopsy at the hospital which revealed that the lump was a cancerous melanoma.  Oh My God…the ‘C’ word!  I had cancer.

I worked up until the day before the procedure, feeling fine.  The offending lump was duly removed, and I think I caught MRS or some other bug whilst in the hospital, as I fell ill and lost weight through loss of appetite.  The medication and radiotherapy didn’t help, making me feel tired.  Unfit for work, I moped around the house for several months.  In my twenty five year working life I had rarely taken time off for sickness and had never suffered an injury.  This was all new territory for me.

I walked in rueful reflection for ten minutes to the River Thames.  A family of swans drifted gracefully into view; father, mother and three juveniles with feathers a mix of white and grey.  Was this the same family I saw in the spring with six chicks?  The three strongest have survived.  Natural selection, the weak must die so the strong can live, but what about me?  We humans are the exceptions.  We are above Nature because we have found ways to cure disease, mend broken bones and prolong life.  I am about to subvert the natural order of things.  Twenty years ago I would most likely have died.

The sun came out from behind a cloud, lighting up a row of moored boats.  I drew myself up to my full height.  Shoulders back, I turn to my left and inspected the fleet.  Marching in line with the swans, I start swinging my arms and bowing regally to imagined fleet captains.  “The World has gone mad and we are beset on all sides by those who wish to harm us.  Prepare for battle, for we must fight to preserve our way of life!”  A startled family hurried by, thinking a madman must have escaped from the asylum.

Swinging my arms I marched away, and with a salute to the swans, crossed the road and headed home.  I felt bullish and determined.  Bring it on.  If I cannot have a reasonable quality of life, then I want no life at all.  I have prepared for this day, following a strict diet and exercising my body and mind.  I was strong enough for the trial ahead and wanted a resolution.  Hope springs eternal in the human heart.  I was ready.