It’s 26th October 2016 and in today’s news (in the UK) is the announcement that the British Government has backed the proposal to expand Heathrow Airport by building another runway.  This is despite protests from the hundreds of thousands of local resident in this densely populated area west of London, and over one million people signing a petition saying NO to a new runway.  Already the air is dangerously polluted, and residents on the flight path (including myself) suffer from poor air quality.  Once again, the interests of Big Business trump those of citizens, in our pro-capitalism sham democracy. 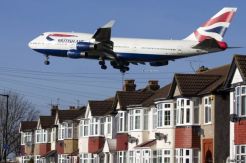 Prime Minister, Theresa May, said the decision shows her government is ready, “to take the big decisions when they are right for Britain.” Right for whom, exactly?  Not for the residents and the million plus protestors, and not for her constituents in Maidenhead, also on the Heathrow flight path, whose protests she was supporting before her swift elevation to party leader.  Why are they continuing to invest in the already overcrowded south east of England and not in the Midlands or North?  They are crying out for investment, whereas residents in the South East are crying out for more space and breathable air.

Add this decision to the many others since the time of Margaret Thatcher that have asset stripped and weakened our country in the name of privatisation and personal wealth accumulation for a tiny minority of international capitalists, and, bizarrely, foreign governments. Our public transport and utilities sectors, owned mainly by international companies, are amongst the most expensive in Europe, as ‘consumers’ pay over the odds for shareholder dividends and senior executive bonuses.  Our small manufacturing sector is dominated for foreign multi-nationals, many of whom reject our country’s democratic decision to leave the European Union and now threaten to punish us by leaving.  The stock markets and money markets are already punishing us for making the ‘wrong’ decision, thus demonstrating our collective weakness to choose our own path when held in the tightening grip of the forces of capitalism.

In Britain, it seems that regardless of which political party is in power, the net outcome is the same – the soft left government of Labour under Tony Blair and Gordon Brown delivered the deregulation of the financial sector that ultimately led to cowboy trading and the big crash of 2008. Neither Labour nor the Conservative Party can be trusted to act in the interests of citizens over Big Business.  We are simply witnessing the latest in a long line of decisions aimed at making a tiny minority of already wealthy people even wealthier.  This is the philosophy at the heart of our bankrupt political system.  I will soon need my own oxygen supply just to survive living close to Heathrow.  Perhaps Prime Minister May can recommend a competitive international supplier?

If you want to share my insight into what Britain and the USA will be like in ten years time, then please click the link below, download and read my novel, Devil Gate Dawn, currently discounted to just 99p/99c…