Sad news this morning (25/05/2016).  British born actor, Bert Kwok, has died, aged 85. He was perhaps best known for his role of Cato, man-servant of bungling Inspector Clouseau, played by Peter Sellers, in half a dozen Pink Panther films. 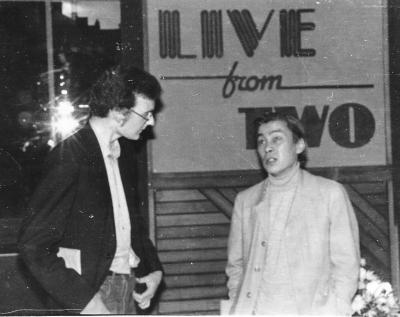 Bert was the subject of my first celebrity interview way back in 1980 when I was a teenage trainee reporter for a Liverpool news magazine, the Woolton Mercury.  Yes, that’s me, aged 18, with a mass of bushy hair, towering over the diminutive Bert.  I had gone to spend a day at Granada TV’s studio in Liverpool to write a feature article for my series on Merseyside media, and was shocked to be invited by presented Shelly Rhodes to appear as a studio guest on that Friday afternoon’s arts and current affairs programme, Live from Two.  The main guest that day was Bert Kwok.

I have a copy of my piece in my scrapbook, and it tells me that that day’s show had a Chinese theme, with Bert, Chinese dancers, a martial arts display and the author of a book on China (no details recorded, due, no doubt to my young and undeveloped journalism skills, mixed with star-struck awe).  Imagine a fidgety 18-year-old  sitting next to the urbane and articulate Bert, regaling the ‘live’ Granada TV audience about his six Pink Panther and two James Bond movies… “and also on today’s programme we have a school-leaver in his first job as a trainee reporter…”

Bert shrugged-off my question about how he felt at being pigeon-holed as a Chinese/Japanese support actor in so many films and TV series (including the excellent Tenko).  He was happy to have had such a long career doing what he loved – acting.  He certainly leaves a tangible, accomplished and highly entertaining legacy behind.

Bert told me he had an affinity with the North West, having been born in Warrington.  He was taken to China by his parents to complete his schooling, then onto the USA to study politics and economics, before returning to the UK to start acting.  His big break came in 1964 when he passed an audition with director Blake Edwards for the part of Cato Fong in the first Pink Panther film.  Appearances in Dr. Who, the Avengers and Last of the Summer Wine, further served to embed him as one of our great British actors, and he received recognition for this with an OBE in 2011.  Incredibly, his first film part was in the classic 1958 film, The Inn of the Sixth Happiness, opposite Ingrid Bergman and Kurt Jurgens.  What an impressive body of work.  Rest in Peace, actor Bert Kwok.

One thought on “Bert Kwok Remembered”