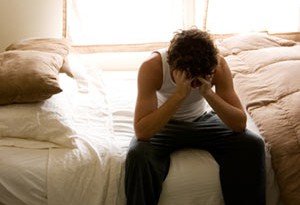 I woke up in a cold sweat – not the side effects of my medication this time, but a bad dream. I was a courier delivering important documents to a grand building on Whitehall.  I parked my bike under a plaque that read, ‘The Department for Work and Pensions’ and walked across the yard, gravel crunching under my feet, to a large dark-wood door.  My finger hovered over the doorbell, but before I could press it, the door opened and a face familiar from TV appeared in front of me.

“You’re…Iain Duncan-Smith, aren’t you?” I managed to stammer.

“Why, Yes, I am,” said the beaming bald man, as he signed for his documents.

“I heard you walking across the yard,” he explained. “The sound of anyone approaching is loud and distinctive,” he purred, as he received the package.

“It’s unusually loud for gravel,” I confirmed, “and so white.”

“Ah, yes,” he said, with a crocodilian smile, as he started to withdraw into the dark interior; “it’s the crushed bones of sanctioned benefits claimants who committed suicide. It provides the perfect early-warning system…”

Not so much a bad dream as a nightmare. I fired up my tablet and opened the Mirror app, skipping the front page shock-horror story and the glamour shot of Kate Middleton looking fetching in Remembrance Day black, settling on a piece on page 2:-

‘£15bn As Sick Work On.’ A University report has finally articulated what many already suspected: “People who keep working when they are ill perform poorly and put their health further at risk, a study says.”  The report goes on to say that those who struggle on because of money or job fears are estimated to cost the economy £15billion a year in mental health issues alone… “Furthermore, working whilst ill can compound the effects of the initial illness and result in negative job attitudes.”

Now, can someone get this message across to the Tory hierarchy? It is counter-productive to harass, vilify and bully the sick and disabled into working before they are either fully recovered or at least comfortable performing tasks that don’t result in worsening their physical condition or mental state.  It is a false saving of welfare payments to force someone to work whilst they are sick to a point that they are returned to expensive treatment and lengthy convalescence.  Let doctor’s do their job and decide who is fit for work and who isn’t, and have a proper graded return to work scheme for those willing and (hopefully) able to have another go.

In the meantime, can someone remove the human bones trophies from Iain Duncan-Smith’s front yard and relieve that man of his bitterly gleeful duties. He is a class warrior determined by all means possible to punish and degrade the sick, poor and elderly of our Nation.  He must be stopped, and compassion returned to the corridors of power!